On July 26, Huawei officially released the world’s first 5G full-network smart router, namely the Huawei 5G CPE Pro. The latter is equipped with the Baron 5000 chip, which runs on a 7nm process technology and supports NSA and SA networking. The price is 2499 yuan ($355). 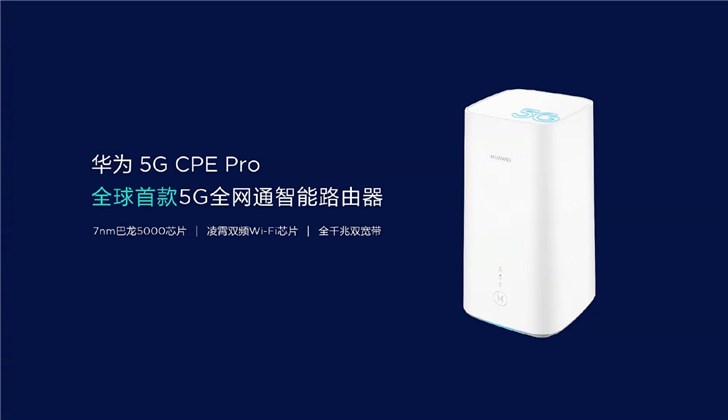 What is the Huawei 5G CPE Pro?

CPE is an abbreviation of Customer Premise Equipment. It is a device that converts 5G or 4G signals into Wi-Fi signals and can be applied to wireless network access such as homes and small and medium-sized enterprises.

The Huawei 5G CPE Pro is a 5G to Wi-Fi and wired network connection device developed and manufactured by Huawei. It has one WAN/LAN adaptive Gigabit Ethernet port, one Gigabit LAN port, and one Nano-SIM card slot, and two 5G antenna expansion interfaces. In addition to the functions of a home router, the Huawei 5G CPE Pro can convert 5G and 4G signals into Wi-Fi signals and support 5G/4G signals or Gigabit fiber broadband Internet access. 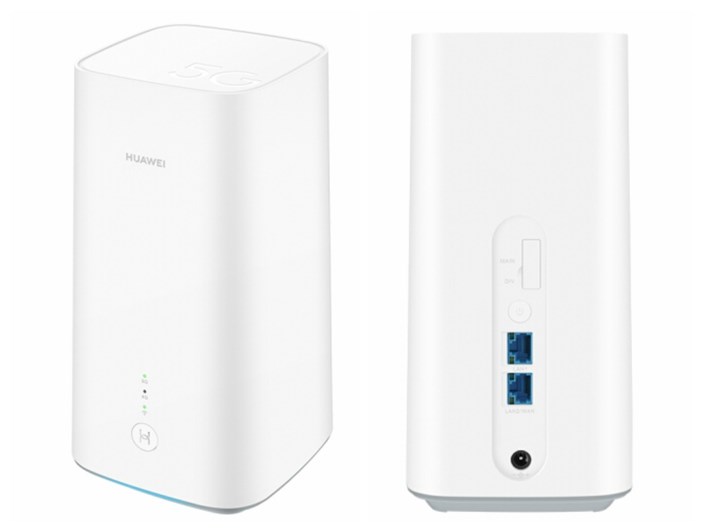 At the same time, the Huawei 5G CPE Pro is still a portable router. Huawei Mobile Router is a series of routers that allows users to convert wireless signals (5G/4G/3G/2G) into Wi-Fi signals. In addition to the traditional router plug-in network access, the Huawei portable router also has the ability to plug in the Internet.

How strong is the Huawei 5G CPE Pro?

The Huawei 5G CPE Pro body size is 107mm × 100mm × 215mm, while the weight is about 700g. The company says they used the ancient Greek column bevel design. The top and bottom form a small bevel angle of less than 0.1 degrees. 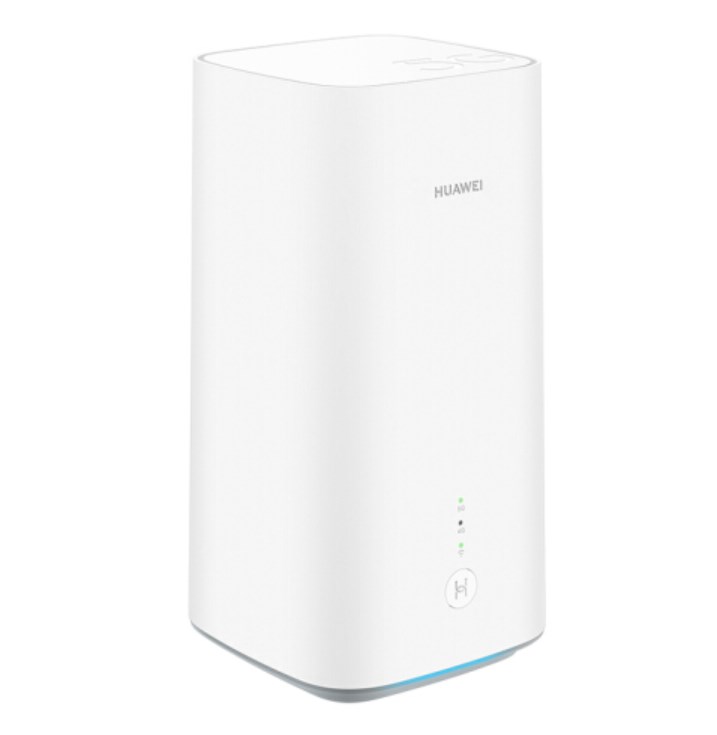 In terms of the fuselage, the router mainly uses white with a blue color, a four-curved body and a circular chamfer, and a white ABS-free spray material. 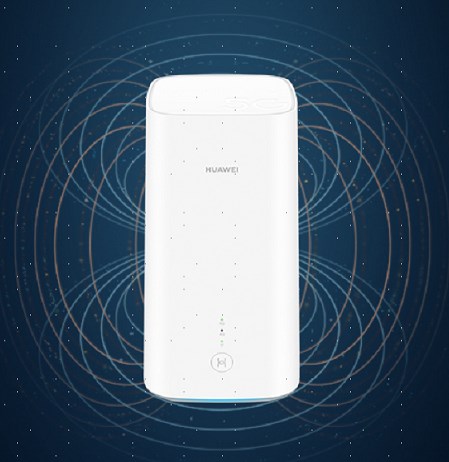 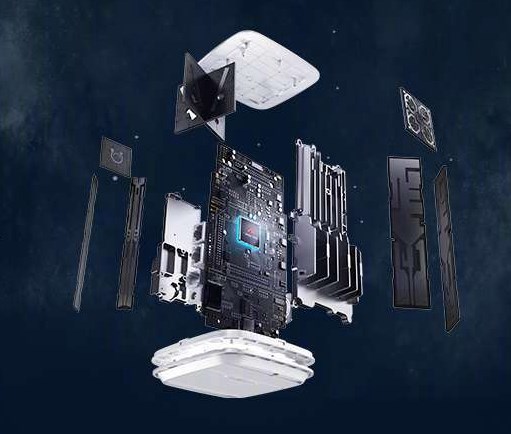 Thanks to the integrated 7nm process, the Baron 5000 chip has lower power consumption and is the world’s first released and the first commercial 5G multimode chip. Then, on February 19, 2019, on the eve of the opening of the 2019 World Mobile Communications Conference, Qualcomm released the 5G multimode chip called Snapdragon X55. At that time, Qualcomm said that the Snapdragon X55 wouldn’t be put into commercial use until the end of 2019. Since then, Samsung has also released the multimode chip called the S5110.

Huawei claims that the 5G CPE Pro supports 5G network and can automatically switch to the 4G network when needed. In fact, it not only automatically switches between 5G and 4G networks but also the Baron 5000 chip adopts a single-chip multi-mode 5G module, which can realize 2G, 3G, 4G and 5G network standards in a single chip. Also, it supports NAS and SA networking mode, and FDD and TDD to achieve full-band use.

Huawei demonstrated the performance of 5G CPE Pro at the press conference and cached a high-definition movie in just 3 seconds. In the 5G network, the theoretical peak rate can reach 2.3Gbps, and the actual rate of the live network is also as high as 1.85Gbps. This is more than 10 times of the 4G LTE speed.

In addition to the Baron 5000 chip, the router also sports Huawei’s self-developed 5G full-band multi-polarized butterfly antenna. The antenna can increase the receiving range of the 5G signal by 30% and the antenna volume by 20%, which ensures the 5G high-frequency coverage and the 360-degree receiving signal. Plus, it can be adapted to different placement positions. 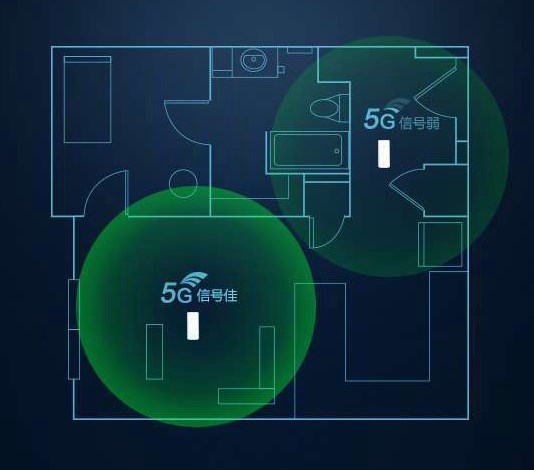 The Huawei 5G CPE Pro comes with a wireless chip and four signal amplifiers. The X-antenna design reduces the antenna size by 20%.

At the same time, the router with the exclusive antenna algorithm supports Beamforming technology. Through four signal amplifiers, it performs a signal enhancement in the horizontal and vertical directions to achieve better coverage. 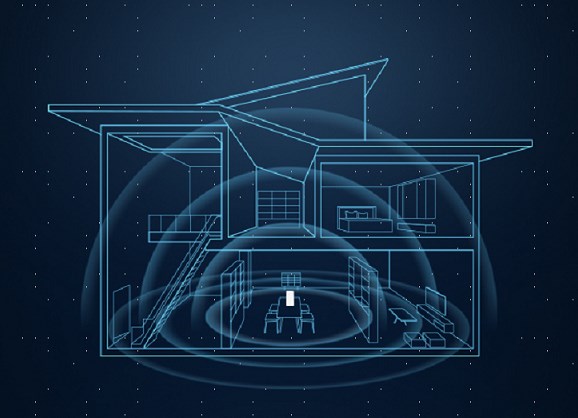 Users can set up and manage the Huawei 5G CPE Pro through Huawei Smart Home app. 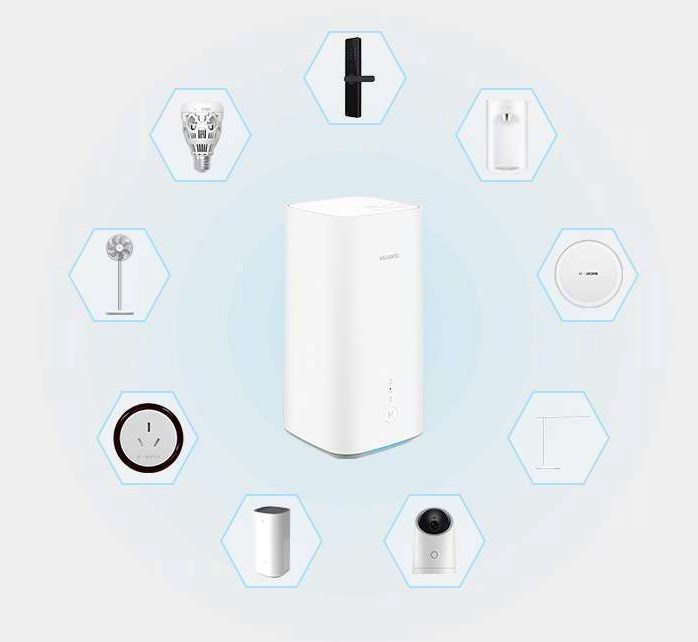 According to the official data, Huawei HiLink Smart Home Ecology has cooperated with more than 200 vendors, accessing more than 100 categories and covering more than 500 products.

At the terminal communication meeting on July 26, Huawei first announced the price information of the Huawei 5G CPE Pro, It costs 2,499 yuan. This router officially went on sale on July 29 in all major e-commerce platforms.