On the afternoon of December 26, Honor released the V-series flagship model, the Honor V20, at the Beijing University of Technology. It is an outstanding smartphone equipped with a Kirin 980 processor, a 48-megapixel rear camera and a TOF lens for 3D modeling. After the meeting, there also was a group visit to Zhao Ming, the Honor president. Below we’ll briefly introduce the summary of the meeting that also reveals the current trends in the smartphone market as well as the vision of Honor in the smartphone business. 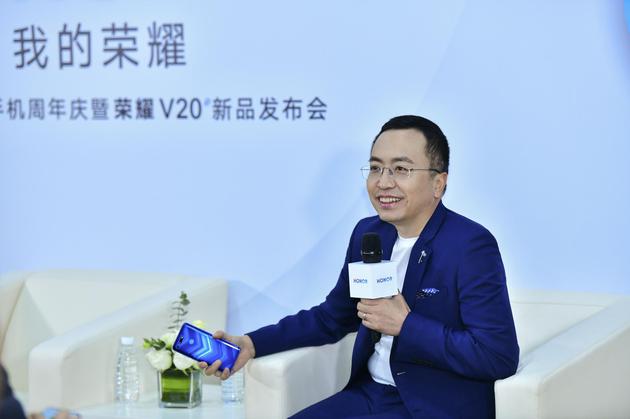 Today’s smartphone market is not as good as it used to be. People’s replacement cycle has become longer, and the days of traditional smartphone manufacturers are not good. The Internet brands have been declining in the last two years. Honor is one of the few Internet brands that survived the overall downturn.

In response to the whole phenomenon, Zhao Ming emphasized that in 15 years, the annual growth of the internal forecast of the smartphone market is still very accurate. The situation of many small brands is not good. Because of their small size, they can only rely on the solutions formed in the industry, and from the chip providers with some strength to make small innovations. So these brands are gradually losing.

For the future of Honor, Zhao is obviously very confident. He gave some examples. In terms of AI, Honor has a powerful AI computing processor support such as the Kirin 980, and there is a big technical team behind it. There is also a cloud computing just released, and it can’t be implemented by the small company.

Honor has come to this day, but the big principles and policies have not changed much. Zhao Ming recalled that in 2015, Honor regarded himself as a ‘stupid bird’. Until now, Honor still regards himself as a ‘stupid bird’. Therefore, the initial heart of Honor of doing your own things and working with brand partners to solve the problems of consumers hasn’t changed at all. He recommends to always insist on your own heart, and you will not be disturbed by the outside world.

Zhao Ming predicts that there will be no more than five brands with sufficient influence in the global market in the future. In contrast to the domestic market, some of the more powerful online brands are now doing the omni-channel expansion, strengthening their online sales capabilities, and expanding their brands’ overseas markets.

In fact, at the launch of the Honor Magic 2, the new logo of HONOR has already appeared, but it was not mentioned in the press conference. Zhang Xiaoyun, the Honor brand development officer, introduced the brand new logo to everyone, assisted by world-renowned designers. Through this new logo, the new image and vision of Honor will also go global.

In addition to the change of logo, the press conference officially changed the Honor brand slogan from the original ‘for the brave’ to ‘Live, my glory’. Zhao Ming explained that the first slogan is based on the environment where young people can realize their dreams. Today, their team and young people are increasingly enjoying this struggle and hard work. So they should enjoy this happy process, and call it ‘live, my glory’.

Of course, there are still some questions about the protagonist of the conference, the Honor V20, and some other products, which are presented below:

1. The Honor V20 still uses a post-mounted fingerprint scanner. Why not use the screen fingerprint that is more popular now?

At this stage of the LCD, it is impossible to implement the fingerprint solution under the screen. On the AMOLED screen, the perfect 4.5mm Blind Hole full-view screen cannot be realized. In addition, the fingerprint recognition rate of the screen is still limited. We have done the most. Of course, there is a certain experience gap with the post-fingerprint.

2. The Honor V20 is the first smartphone of the company to use the TOF technology. Is there any breakthrough in Honor in this respect? What new features will there be in the future?

Zhao Ming: This time for TOF development, many programs are not only based on hardware but also based on real TOF capabilities, such as YOYO Hyun dance.

3. At the press conference, you said that some of the supply chains have not met your requirements. The Honor V20’s screen camera is more extreme than the rivals. What do your suppliers do?

4. Today, the Honor V20 conference also released cloud computing technology. What do you think is the core advantage of this technology?

Zhao Ming: Cloud computer allows us to truly transform our smartphone from a personal life terminal into a full-scale personal center. This is a huge upgrade. The smartphone was originally made for phone calls and communication. Now there are more social functions. But many times, it is getting farther and farther away from work. Even if the work is done through WeChat and email, it is also a platform for communication.

5. At the press conference, Honor launched the e-commerce platform. What is the positioning of Honor on this platform?

Zhao Ming: This platform is for Honor in the future O2O. Now we are at Vmall Mall, as well as online platforms such as Tmall, Jingdong, Vipshop, Suning Tesco. This platform will let us better understand the Honor users. We will get more direct user information. This will help us to make better products.

6. Regarding the issue of the first flagship store under the line, when will the store open, is there a plan?

Zhao Ming: According to the original plan, we have been working to open it this year. But seems it will be a bit delayed, coming in early 2019.