Xiaomi Mi notebook air announcement has caused the heated discussion from many users about no logo in its design, the thickness, or the hardware and game performance. So Xiaomi released its first mi notebook air has attracted much successfully. So how is this notebook? As you know, Mi notebook 13.3inch focuses on home office and entertainment and 12.5inch for portability. This time we test Xiaomi MI Notebook Air 13.3inch which only has one configuration such as Intel Core i5-6200U processor, RAM 8GB 256GB ROM, NVIDIA GeForce 940MX GPU, 13.3inch 1920X1080 IPS screen, preinstalling Windows 10 OS, selling at 4999 yuan.

Xiaomi MI Notebook Air 13 uses all metal design with two colors, silver and golden. We test this silver one. Meanwhile, it joined the metal sand blasting process in aluminum body with comfortable holding feel. Although it’s not as sleek as Macbook, taking consideration of cost control, MI notebook air performs well in view of selling price. Sandblasting process can not only improve the grip feeling but also reduce the fingerprint staying.

Xiaomi Mi notebook Air 13.3inch has no logo design which can be good or bad for most users. We can beautify our notebook by DIY, but in view of design, it shows no specialty for us.

Xiaomi mi notebook Air 13.3inch has only 14.8mm thickness which is very light and thin compared with other notebooks right now.

But right now besides Apple sticks to use mirror screen design, rare manufacturers adopt glass design in non-touch device, so this kind of decision has been considered twice. In addition, Xiaomi mi notebook Air 13 uses 7H level hardness in its screen in order to avoid minor scratches.

Xiaomi Mi notebook Air 13 has very narrow bezel design with 5.59mm width. But the overall screen to body ratio is up to 80.1% with so beautiful look. Meanwhile, there is a Mi logo at the bottom of the screen.

Xiaomi Mi Notebook Air has very simple design, 5 rubber mats, a row of cooling wind hole,  two AKG custom speakers on the base, no redundant design. In addition, there is xiaomi logo at the bottom.  According to test, Xiaomi notebook speaker has nice audio quality customized AKG, which is one of the most excellent notebook in its sound effect until now.

Xiaomi mi notebook Air 13 has 1.242kg net weight, it has become 1.464kg weight with power adapter. So it has nice portability in view of its design.

Xiaomi MI Notebook Air 13 has white power adapter, whose size is similar to our palm, we can hold it easily due to the light design. It also uses USB Type C port to support 1C quick charge, which can charge 50% in half hour with high charging efficiency according to xiaomi official.

In addition, Xiaomi mi notebook Air has very comfortable pressing feeling in the keyboard according to typing for a long time.

On the left side of Xiaomi mi notebook Air 13 is full-size HDMI port, USB 3.0 port and 3.5mm earphone port.

There is a USB 3.0 port and USB Type C on the right side of the body, and a power notification to the most left. And USB Type C specs is USB 3.1 Gen 1, the largest 5Gb/s speed rate.

Xiaomi official also provides USB Type C multi-function adapter which is very compact with white color, it has one USB 3.0 port, one HDMI port and one USB Type C port.

After using this USB Type C adapter, we can let Xiaomi mi notebook Air 13 to have at most 2 HDMI output, 3 USB 3.0 output, and USB Type C output.

There is a 720P camera on the top, and a light sensor on the left, and a stereo microphone array combination for video talking or network voice on the left and right sides of the top edge.

In processor, we test it by CineBench R15 software, the multi core has 291cb scores, and 117cb score in single core. So it performs in general. 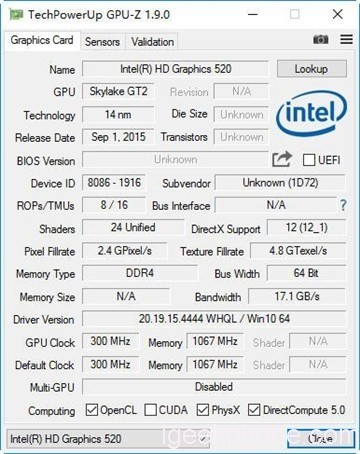 From test scores, 940MX performance is actually higher, but compared with the NVIDIA GTX 950M, there are still large gap.

Xiaomi mi notebook Air 13 uses PCIe×4 NVMe SSD, PM951 SSD, according to test, its average reading speed is 1306.07MB/s, and average writing speed is  261.28 MB/s, the overall score is 1758 score. Due to the fast reading speed, Xiaomi mi notebook Air 13 also has fast turning-on speed. It is said it only takes 2 seconds to realize sleep or wake up mode. It’s true according to our test.

In battery life test, we uses playing video online, we set up the battery mode as balance, 50% screen brightness.30% volume, wifi connecting, we open youku to test the video online. Before playing video, the battery has 97%, after 30 minutes, it has 88%, so it’s estimated that the overall battery life will be 5.5 hours, which is different from the official which claims 8 hours battery life. But xiaomi notebook has faster charging speed, it can charge 50%  in 30 minutes.

According to test, Xiaomi mi notebook Air 13 is equipped with NVIDIA GeForce GPU , when we play LOL, it shows very fast and fluently. So this is main advantage of Xiaomi notebook for most game lovers.

In high quality screen quality, we play the game very smoothly, the game footage showed very clearly, running very stably.  Its frames remain at around 80,even over 100 sometimes. But with playing the game longer, the pictures details become richer. Frames began to float, there is a period of time to show 40 frames, but it still performs well which can meet the basic needs to run the games.

Unscrewing 8 screws on the back fuselage, we can remove the bottom cover of the notebook. According to the inner body, PCB  is the common blackboard in the high-end models. Although this can not experience the design and craftsmanship, by observing the parts placement, welding, even metal shield design, we think Xiaomi mi notebook Air 13 shows the first class standard compared with same level models.

In exstension, Xiaomi mi notebook Air 13 highly publicized it can support the second memory slot, but it’s rare to see this kind of thin and light notebook. Because right now most of notebook uses SSD. It reserved M.2 SSD, which can expand the storage freely without bringing the mobile hard disk.

Xiaomi mi notebook Air 13 is equipped with 39Whr Lithium polymer battery, provided by LG, and loud speaker has larger cavity on the left and right sides.

From the inner axis, Xiaomi mi notebook Air 13 cooling outlet is located on the right side of the body shaft, left part has not open port. 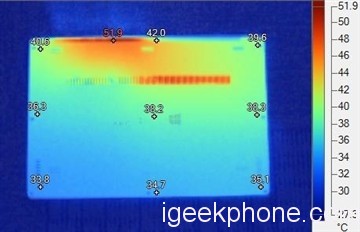 After knowing the cooling layout, then we use AIDA 64 software to test system stability by 15-minute thermal imaging analysis. Through thermal imaging figure, on the surface of the fuselage C, heat mainly concentrated in the keyboard on the left side of the middle area and shaft area on the right side, the highest temperature is 53.3 degrees located in the shaft on the right side. The heat is concentrated in the main rotor outlet for the fuselage D faces corresponding area and hole at the bottom of the cooling ventilation, the highest temperature of 51.9 degrees. So we can see the cooling performance is quite good in Xiaomi mi notebook Air 13. As for the reason, it uses all metal body, so it has nice cooling system.

Xiaomi mi notebook Air 13 has great advantage in design, hardware, battery, but also in its price, especially compared with Macbook Air and Lenovo Air 13 Pro, after all, this is the first  time that Xiaomi released its mi notebook Air.  So if you are looking for a budget and nice performance notebook, it can be your good choice.